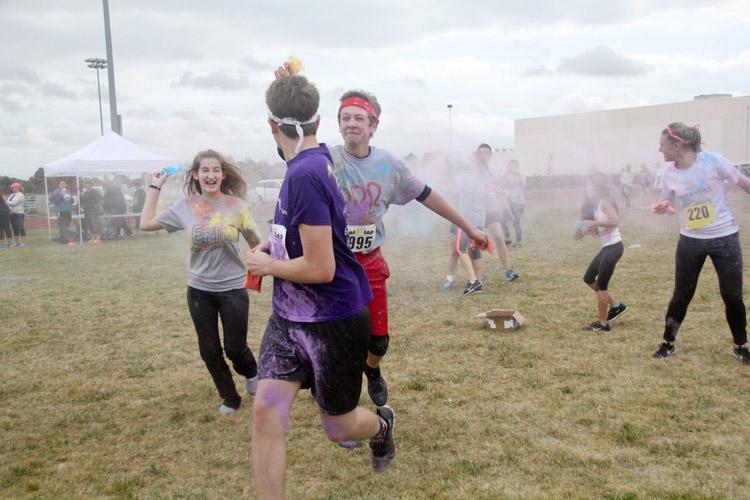 Students participate in the color fight at the end of the Red Ribbon Color Run.

About 90 people came and participated in the event, according to one of the many coordinators of the group, junior class president Ike Bertels.

“We had what felt like a bunch of people show up for the run,” Bertels said. “Then we had even more come just to support and participate in the silent auction.”

The silent auction featured items donated by many surrounding businesses.

“It was a great start to Red Ribbon week,” Bertels said.

The event, which featured a one mile “fun run” and color fight as well as a 5k, got students in the mood for Red Ribbon week, which took place the week following the run. The four day week involved many spirit days, including “wear red” day and rounding the week out with a costume contest sponsored and judged by EPIC.
“Seeing how many people dressed up was a really fun experience,” Bertels said.

The spirit days were Monday Merica’ Day, Tacky Tuesday, Wear Red Wednesday and finishing with the costume contest on Friday.

“The costume contest was really exciting,” Bertels said. “We have people go all out for their costumes and it makes the day fun.”

Junior Erin Morrissey took point on the planning of the race and silent auction.

“The entire thing was a success,” Morrissey said. “We had a scare at one point, but in the end it all worked out.”

After the event, it was realized that all goals had been met by the participating students.

“Our whole goal was to make money to support EPIC, ASAP, FIT, and GO,” Morrissey said. “I’m not sure of the exact numbers, but we definitely met our goal.”

Although the fun run had to be canceled due to lack of participants, the team is already looking forward to next year, which they’re hoping will include a walk to involve those who don’t wish to run.

“I think everything turned out awesome,” Bertels said. “It seemed like everyone had a really good time, and we’re excited to make next year even better.”