Saying Goodbye to the Circus 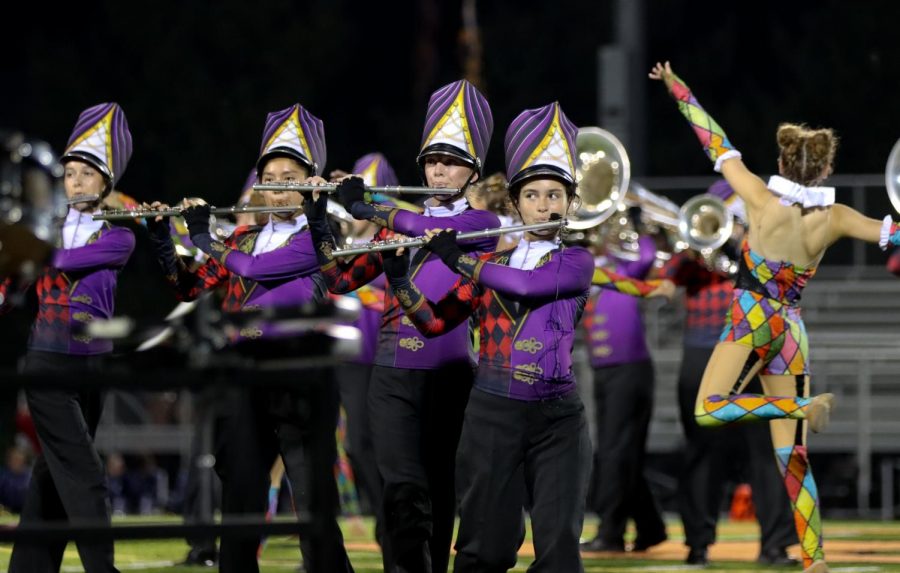 It’s already dark outside at 7 PM when they take to the field, air crisp in the cold change of seasons.

It’s dark outside, and dozens of purple-clad musicians are standing motionless on Belleville West’s massive football field, poised waiting for their cue from the announcer.

It’s dark, but the stadium lights are bright and the Marching Tigers are just beginning.

Edwardsville Marching Band, alongside schools from across the St. Louis region, met at Belleville West high school on October 30. They were there to compete in the Greater St. Louis Marching Band Festival, but their presence at the event was already a kind of victory.

For the first time in any of the musicians’ high school careers, they had been able to perform at the festival without interference.

Last year, it was COVID that had kept the festival from occurring entirely. The year before, rain forced the performances inside. And the year before that, issues with the band’s trailer made it impossible for EHS to attend the event.

This year, though, EHS Marching Band came to Belleville with a sense of confidence.

Just a week before, at Illinois State University, the band had made school history with its highest ever score at the Illinois State Marching Band Championships.

“We were excited and buzzed coming off our fifth place at ISU,” Junior baritone player Grace Ramsey said. “We knew there was some good competition at Belleville, and we wanted to go to give our seniors a good last show.”

For underclassmen band members, stepping out onto the field for the first time was “a dream come true,” according to sophomore saxophonist Christopher Fuller.

“It’s such a life changing experience. Especially since last year we didn’t get to experience anything like that. It’s so much more than what you’d ever think,” Fuller said.

Soon, the band is in place, and the sound of Belleville’s announcer gives way to a voice calling out to the crowd.

“Ladies and gentlemen, please welcome to the field, the one and only Carnival Mystique!”

With that, the music begins.

The musicians are battling the weather this late in the year, complicating the band’s playing.

“Instruments change pitch depending on the weather. Since it was really cold, then all of the woodwind instruments all got super flat,” Fuller said.

The seasonal shift also made for unique playing conditions, according to junior trumpet player Jessica Loyet.

“It was super spooky,” Loyet said. “It was right before Halloween and the field was just covered in mist.”

The temperature may have hindered the performance, but the marching band fought its way to the top of the festival. Of the 18 bands competing, Edwardsville secured a spot at third place in the event. The band placed above Normal, who had beaten EHS during preliminary competitions at ISU a week before.

“I thought we were doing fantastic, like it was one of our best run-throughs ever,” Ramsey said.

While some thought it the best performance of the season, it also would be the last marching competition of high school for the senior members of the band.

“It was very emotional for everyone. After we got done, so many people were in tears,” Fuller said. “It made everyone realize how beautiful our creation was and made us want to do more.”

An energy of “excitement mixed with a bit of sadness” had been present at the competition according to Ramsey, the musicians coming to terms with their last time performing “Carnival Mystique.”

To Loyet, those mixed emotions came from the idea of saying goodbye to senior friends and taking on more responsibilities next year, but “a good, solid performance to end on” made a worthy send-off for the season.

“…I was afraid about being the oldest section leader next year,” Loyet said. “But I was also happy it was the last show, it was a good season but it was time for it to end.”

Now the sky is much darker than before, with celebrations and goodbyes to be had. And the feeling of finality hangs in the cold autumn air.

“It sort of came over the whole band, as we were also sad to end marching season,” Ramsey said. “But we were glad with how the season had gone.”