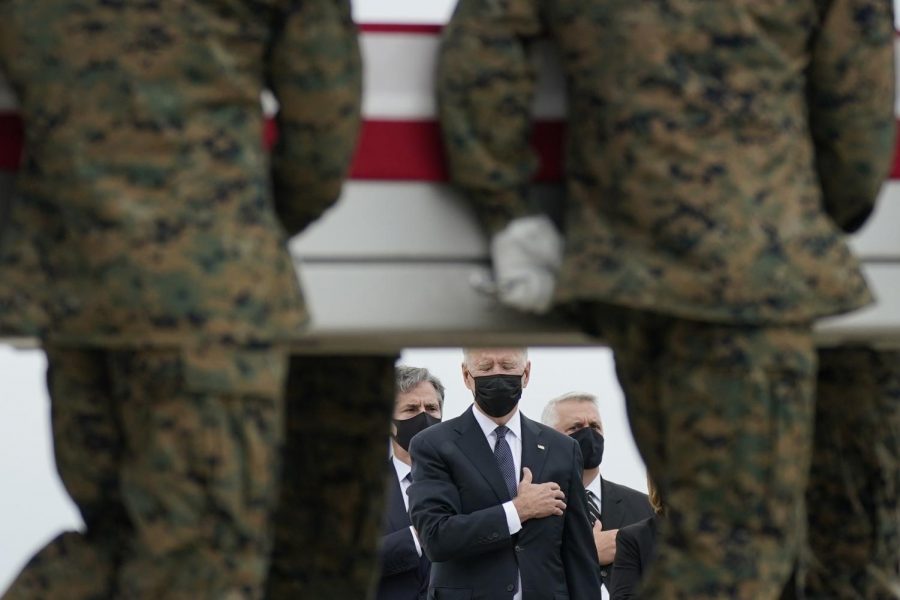 President Joe Biden watches as the remains of the 13 service members killed during the Kabul airport attack are carried off the transport at Dover Air Force Base.

The sun sets over Hamid Karzai International Airport as the Americans remaining in Afghanistan board flights back home. Fleeing Afghan citizens jump barricades by the thousands, hanging onto planes as they take off. Dozens plummet to their deaths as the planes lift off, meanwhile others are being gunned down by Taliban. The question is, does President Joe Biden have blood on his hands?

Presidents Obama, Trump and Biden have all wanted to leave Afghanistan, but Biden was the one to finally pull it off. But there is a right way and a wrong way to pull out of a war.

Biden claimed that the Taliban wouldn’t be able to take over the capital of Afghanistan for months, but they did in mere days. He opted to pull out of Afghanistan with lighting speed, without protecting our $1.5 billion embassy and retrieving the $6 billion worth of military equipment and vehicles housed in Afghanistan, and as soon as the Taliban got their hands on it they took the capitol.

The American troops shouldn’t have been pulled out in bulk. Obama and Trump both pulled out troops slowly, as you cannot leave the citizens of Afghanistan completely unprotected. When faced with backlash, the Biden administration echoed the message that all wars have casualties; is that the right mindset?

We had troops in Afghanistan to defend the people, so leaving without defending them doesn’t make sense. Evacuating American non-military personnel should have been the first priority (embassy workers, journalists, photographers, etc.), along with the Afghan’s holding green cards and those eligible for visas.

In what seems to have been an unorganized plan for ending the war, on Thursday, August 26th, the Abbey Gate at Karzai Airport was attacked by suicide bombers and as a result, 13 US service members were killed and hundreds of Afghan civilians died. This act of terrorism could have been prevented. The Biden administration relied on the Taliban, a known terrorist group, to be our ally. They want nothing more than to harm US citizens.

On Sunday, August 29th, the remains of the 13 US service members returned home. Many of the service members graduated from high school within the last 5 years. The parents of the gold star heroes were given the opportunity to meet President Biden.

“Biden talked a bit more about his own son than he did my son, and that didn’t sit well with me, referring to Biden’s son Beau Biden, an Iraq War veteran who died of brain cancer in 2015,” said Mark Schmitz, a father of a marine who died in Afghanistan.

After the attacks, there were said to be 1500 non-military personnel stranded without a way to get out. Citizens spread out across the country and those left in the embassy should have been provided with a better means for escape and better protection.

President Biden has made America seem weak on an international scale; by leaving the Taliban with our weapons, we have now left our country weak and vulnerable. In the midst of evacuation, we have provided refuge to unidentified Afghans. The question is, when will the Taliban attack?