2022’s “The Batman” Freshens Up the Franchise 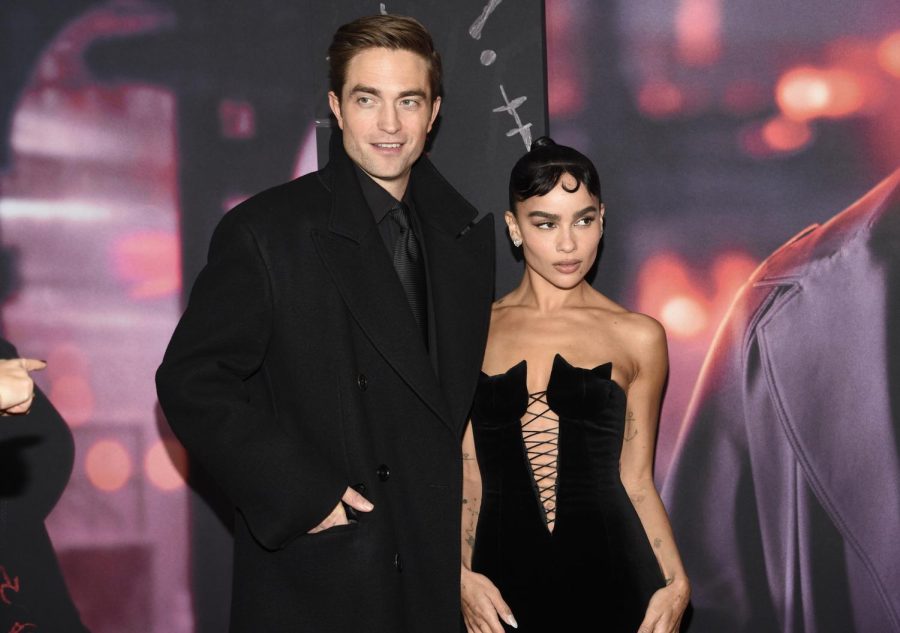 Robert Pattinson, who plays Batman, and Zoe Kravitz, who plays Catwoman, walk the red carpet at the world premiere of "The Batman" on March 1, 2022, in New York.

You can’t see him, but you know he’s there.

The Bat-Signal shines in the night sky over Gotham City, and the darkness no longer shelters criminal and menacing behavior. Because within the darkness, Batman watches and waits to bring justice to his city.

Premiering on March 4, 2022, “The Batman” portrays the famous vigilante as a truly nocturnal animal. Rarely do any of the movie’s scenes take place during the day, and if they do, it’s cloudy and raining. The dark setting sets the tone for the film’s content, and the villainy it portrays.

Batman’s main foe in the film is the Riddler, played by Paul Dano, who murders city officials to expose the corruption in Gotham. He wears a black mask that leaves only his eyes revealed, and he lurks in the shadows before committing his crimes.

Riddler leaves cryptic clues at his crime scenes intended for Batman to read. The messages contain ciphers and riddles that turn Batman into a detective more so than in previous films.

Robert Pattinson plays Bruce Wayne, and he does a wonderful job of portraying the character in a way that has yet to be done in major franchise films before. He’s serious and aloof, but he has an obsessive nature about his work.

The detective aspect of the movie makes it unique to any superhero film I’ve seen. I’m a big fan of the Christopher Nolan Batman trilogy, and I think 2022’s “The Batman” is just as good, if not better at times, than these films.

“The Batman” forgoes an origin story, and instead starts with Wayne as being the Batman for two years. I think this is a smart choice by director and writer Matt Reeves; it leaves room for more relevant plot points instead of using time to show a backstory that can be inferred by the movie’s content.

Though this movie isn’t short on time. The runtime clocks in at 2 hours and 56 minutes, making it the longest Batman movie.

While I think the film could have easily been cut down, I’m glad it wasn’t. With shots of Gotham or Batman set to somber music (Nirvana’s “Something in the Way” is a recurring song), the movie feels indulgent. The audience came to see a full and fresh take on Batman, and Reeves leaves them satisfied.

Reeves sticks to a somewhat realistic approach for this film, which I always appreciate. While I enjoy Marvel movies, it’s nice to see a vigilante fighting against corruption and anarchists rather than aliens now and then.

And the realism makes the movie frightening at times. Riddler uses technology and social media to amass a devoted and disturbed fanbase, and the aftermath is something that I could see happening in real life.

With the serious, grounded subject matter, the film doesn’t rely on comedy to keep the plot moving. Though there is a quip here and there, the dialogue is overall plot-based. I especially like the dialogue between Catwoman, played by Zoë Kravitz, and Batman.

They have their first interaction early on in the movie, and quickly become comfortable enough with each other to be honest and outright about what they feel. While I’ve seen criticism that the two don’t have chemistry, I thought their open communication built emotional chemistry between the two.

I think this movie will satisfy any diehard Batman fans who may have been naysayers about the film’s casting. Pattinson, Kravitz and Dano all give multi-dimensional performances that bring together the new take on the franchise.

And for people new to Batman, the performances and engaging plot are the perfect introduction.